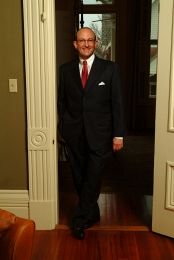 This is what I have noticed from coaching salespeople for 30 years- successful people have a ferocious drive and hunger, yes hunger, for success.  This drive and hunger pushes them to never give up when others would quit or be satisfied with where they are.

Success in sales does not come without bumps.  One year I went six months without a sale but I still had my best year ever.  There is usually no perfect ascent to success.  It just does not work without obstacles, frustration and defeats.  Sometimes I wonder how I kept my job that year.

Most of the time I find successful salespeople are spurred on by defeat.  They learn from their defeat and start over from a stronger position of knowledge and determination.  In addition, I have seen successful salespeople take full responsibility for their defeat.  They do not blame their circumstance or their situation.  They go over, under or around any obstacle in their way.

One of the greatest salespeople of our time is Richard Branson.  He created great companies like Virgin Atlantic and Virgin Music.  He is an inspiration to all of us.  He dropped out of school at 16.  He started a magazine that failed.  Along the way to his success he failed at Virgin Cola, Virgin Vodka, Virgin Clothes, Virgin Vic, Virgin Cards and several others.  Yes, Richard Branson had a lot of failures but that did not stop him.  In sales if you want more yes’s you need to get more no’s.

How about J.K. Rowling?  Everyone knows about Harry Potter.  The series has sold over 400 million books.  It is one of the top five book and film series ever.  It made her the richest woman in Great Britain (besides the Queen).  Did you realize she received dozens of rejections from publishers?  They told her “children’s books never make money” and that her book “was too long.”

J.K Rowling was living in her car with two children.  She was divorced and on welfare.  She had no visible means of support.  However, in the midst of the darkest circumstances she never gave up.  She had a hunger for success that was unquenchable.  Ask yourself what is your level of hunger.

Finally, look at Walt Disney.  He was fired from his job with The Kansas City Star newspaper.  The reason was because he wasn’t creative enough but he did not quit.  In 1922 he started his first company Laugh-O-Gram.  This business produced cartoons and shot advertising films.  One year later the business went bankrupt.

Rather than quit he moved to California and started the Walt Disney Company.  It’s a global empire of films, products, amusement parks and talent.  It has made an impact on almost every person in the United States.  Wow, what if he had quit when he failed?

You see almost every successful salesperson I have met or read about failed at some time in their career.  As you approach your life in sales realize that every failure is an opportunity to get better and move forward.  Remember in every seeming adversity there is a seed for greater growth.  Our job is to find it.